Doctor Who: season eleven, episode 4, ‘Arachnids in the UK’ 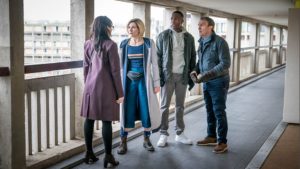 This was a solid episode. It didn’t blow me away the way that the previous three episodes did, but it didn’t have to. Not every episode has to deal with issues as prescient and historically significant as ‘Rosa’, and we shouldn’t expect them to.

Besides which, it’s worth remembering that even if this didn’t blow my mind, 35 year old women are not the primary target audience of Doctor Who. Six year-olds are. And people are most likely to develop phobias between the ages of four to eight years.

While sometimes phobias can be caused by a traumatic experience, there’s thought to be a genetic element that affects common, simple phobias – like the fear of spiders and the fear of heights. This is often misleadingly referred to as ‘ancestral memory’. Arachnophobes don’t ‘remember’ a bad experience an ancestor had with a spider, but it was likely a genetic advantage to be sensitive to, say, the distinctive movements of spiders, and to respond with the fight or flight reaction. Such a response is irrational in the UK, where there are no native poisonous spiders, but less irrational in Africa, or indeed most continental landmasses.

Fear of spiders in the UK is one of the least rational fears you can have, and yet it persists. I should know. I started being afraid of spiders at the age of six.

Nearly 30 years later, the phobia persists, yet I was not particularly scared by this episode. That’s not the episode’s fault. I’m rarely scared by TV or film when I watch it by myself. My Twitter feed was full of grown adults who certainly seemed to be watching through their fingers. But even if adults weren’t scared, this had all the elements to make a lasting impression on a child.

Because spiders are strange. What they do to flies is usually no danger to most of us, but if they were large enough to subdue humans and wrap them in their web cocoons, that would be pretty fucking scary. To be rendered helpless and immobile and enclosed in a claustrophobia-inducing manner, and to be kept in a spider’s larder as something’s food.

It’s a perceptual shift. Very little truly threatens human beings in nature. Very little eats us as a matter of course. Many things could eat us. It’s quite rational to be afraid of a lion, for instance. But those things are rarely a realistic threat for most humans in most places. Consequently, one’s first encounter with the suggestion that people could be food tends to leave a lasting impression.

For me, it was giant spiders. Two years before I developed the phobia of normal spiders, I saw the second episode of the original Battlestar Galactica. I can’t say that I fully understood the plot. For years it lived in my memory sort of merged with Logan’s Run, and it was a long while before I understood that the two things were different.

But I remembered the spiders.

The spider-like Ovions that cocooned unwary gamblers on Carillon and kept them as food.

A few years after that my teacher read an abbreviated version of The Hobbit to my class. Again, the Great Spiders of Mirkwood stuck in my memory as uniquely horrible. Especially when the party is cocooned. Those spiders were going to feed on them. Suck them dry as they hung, swaddled in webbing and helpless.

I think there will be a few young minds who will be forming similar memories tonight. So the fact that it didn’t really scare me doesn’t matter. It will have scared the children – which Doctor Who should if it possible can. *evil laugh*

As a kind of sop to the ‘should we really be making children scared of spiders’ worry, we see that towards the end of the story the Doctor is reluctant to kill them and says of the mother spider ‘She’s probably more scared of us than we are of her’. As an arachnophobe, I can’t tell you how tired I am of that particular phrase. I understand why they included it, but it’s honestly so beside the point. Phobias are not rational.

I do not believe the spiders in my house can harm me. I am quite worried about how easily I can harm them – in fact, my visceral reaction to dead spiders is actually worse than my reaction to live ones. Phobias are not rational.

Yes, two pieces of media featuring giant spiders left a lasting impression on me from childhood, but they had nothing to do with my phobia. It was a couple of years after seeing Battlestar Galactica that I became afraid of spiders (and heights – it happened at around the same time) and a couple of years after that before I was read The Hobbit. There’s no sign at all that scary giant spiders had anything to do with my becoming afraid of little spiders.

It’s almost certainly a genetic fear. No amount of people telling me the spiders are more scared of me than I am of them is going to change it. But on the plus side, I doubt the BBC created millions of arachnophobes tonight. It’s either going to happen anyway or it won’t.

Overall, this episode solidly delivered on a classic concept. It wasn’t particularly original, but if didn’t have to be – it will be new to the six year-olds watching today.

Beyond the central conceit (which really is just Big Spiders Are Scary) there were a few other nice notes.

Chris Noth makes for a perfectly loathable villain, as the slimy big businessman with his sights on the US presidency. I know him best as Alicia Florrick’s inferior half in The Good Wife, where he plays a corrupt politician and philanderer; so it’s a familiar fit, and he did a creditable job portraying a man whose money and confidence has blinded him to morality.

I was a little confused by their positioning him as a man who hates Trump while characterising him as… a man very much like Trump. I’m not sure what we’re supposed to take away from this, and I’m worried that it sends the message of ‘Both sides are as bad as each other; all politicians are equally loathsome’. That is not a message we need in these times, where the last week has seen a Nazi shooting in a synagogue and bombs sent to Trump’s political enemies by a fanatic Trump supporter. People are literally equating these actions to members of the Trump administration being yelled at in restaurants.

Some politicians are much worse than others. Both sides are not the same. I want to find another reading for this, but I’m baffled as to how we are supposed to see it any other way.

Still, Noth does a good job in a familiar role.

We also have some lovely notes of family togetherness as the Doctor is delighted to be invited to ‘Tea at Yaz’s’. I liked that Yaz’s family kept asking whether Yaz was  in a relationship with any of the members of the group, and Yaz firmly answered ‘No’. While I see the possibility of a relationship slowly developing between her and Ryan, I like that we’ve not immediately jumped there. There’s been far too much of ‘All women must be in relationships’ in the Doctor Who of recent years, and this is a pleasant change of tone. We get both the message that men and women can just be friends and the opportunity to note that Yaz’s family are entirely comfortable with the idea that she might like women (ie the Doctor).

Meanwhile, there are some really touching scenes as Graham goes home and remembers Grace – his wife and Ryan’s grandmother. I thought this was really nicely handled. The only thing that felt off about it was that Ryan doesn’t seem to feel the same kind of grief and desire to go home. Of course, the plot needs to keep rolling, but Grace seems to have performed a motherly role for Ryan, and it’s weird to see Graham’s grief taken so seriously while Ryan seems to brush it off and get on with adventure.

Overall, a solid episode. I wasn’t blown away, but I don’t need to be. This one was for the kids, and that’s OK.

If you like my reviews, please consider buying me a coffee.

This entry was posted in Doctor Who and tagged Doctor Who. Bookmark the permalink.

2 Responses to Doctor Who: season eleven, episode 4, ‘Arachnids in the UK’