Games of Thrones, Season 6, Episode 1 – aka, why should I bother? 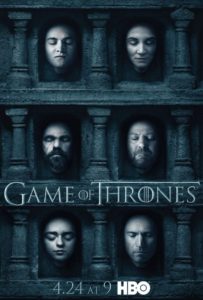 I adored Game of Thrones when it first came out. I had been excited for years before it came out. But even I approached this season with trepidation. I’ll be blunt (trigger warning: rape mention) I’m talking about the rapes. The extra rapes. Rape where sex was consensual in the books (i.e. the rape of Cersei by Jaime (who hates rape and saves Brienne from rape what even?)) and the rape of Sansa, which had previously been Jayne Poole (which was also bad, but… many people were invested in the story of Sansa’s quiet, feminine strength and… it was problematic OK?)).

Our amazing show, which gave us so many amazing female characters in so many different roles that we’ve never gotten to see women play before and all together, not just one or two and… it was amazing, and where it then went the last two seasons left a lot of people feeling betrayed.

What’s more, last season was weak overall. I talk about this at length in my review of Season Five. I know a lot of people who bailed afterwards. I knew I wouldn’t, but as the new season approached… I wasn’t sure why.

But I watched it, and… I was more than pleasantly surprised.

The following is not a review – I’ve not the energy for that – but rather, it is a minimally spoilery list of reasons to watch this episode and hope that things are turning towards the light. (I mean, not for the characters – those fucks are gonna suffer, you know that, right? – but for us as viewers who need things to get a bit less rapey and sexist.) I make it for the sake of saying ‘You may be worried, but these things happen and they are the good things you probably didn’t think would happen‘:

Things are going to get better for Sansa.

Brienne is gonna be FRIGGIN’ AWESOME.

Dolorous Edd is pretty cool. I just like writing that sentence, ngl.

Tyrion and Varys politically analyse Meereen. You know you want it.

Daenerys. Is not a white saviour to anyone (in this episode). Which is good. She’s taken down a lot of pegs. But she’s also pretty awesome. Which is also good.

Sand Snakes. Are snakey. And even if their characterisation last season was lack luster, they certainly make a statement.

Arya. Is on screen and therefore awesome. But also blind and suffers physical consequences for this.

Nakedness… happens. But not in the way you expect it to.

I mean, the first two points were the most important to me, and they satisfied exactly what I needed to make this episode worthwhile, but the other stuff is also good.

And no, I’ve not told you anything about Jon Snow. As is right and proper. Watch the episode if you wanna know about that.

1 Response to Games of Thrones, Season 6, Episode 1 – aka, why should I bother?