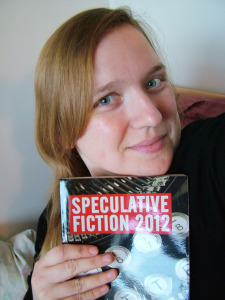 I’m super thrilled to say that Speculative Fiction 2012 won the British Fantasy Society Award for Non-Fiction today. As regular readers will be aware, my post, ‘Remembering Margaret Cavendish‘, was published in this volume as one of the fifty ‘best online reviews, essays and commentary’ on the speculative genre in 2012. Obviously, it’s pretty awesome for me to have had my work published in a volume that has won such a prestigious award. And I’m stoked for Margaret Cavendish, as well, who only desired fame, and has been wrongfully denied her place in our memories as the first writer of science fiction (in the European tradition, at least). But more than anything, I’m thrilled for Jared Shurin and Justin Landon, our simply amazing editors.

Jared and Justin collected together a really incredible selection of essays that you really all should read. More than that, they have modestly and generously been consistent in sharing their praise with their contributors, including sending us specially commissioned artwork to commemorate the Hugo nomination. I’ve joked about sharing a 50th of a Hugo nomination, I could joke about sharing a 50th of a BFS Award, but the truth is that this is a really well deserved win for the two of them, without whom the collection would never have come into existence, and without whom my little essay would never have seen print, or had the recognition it has had since. They deserve every bit of this award, and I’m really just stoked that it has come through.