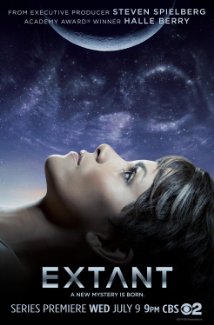 I decided to check out the new Sci-Fi series Extant, available via Amazon Instant Prime (and apparently CBS, but pfft! Like I watch real channels!).

On the surface, Extant has a lot going for it that could provide a breath of fresh air – certainly for me, following the race and gender fails of the recent series of Hemlock Grove. Halle Berry as a starring role – a woman of colour, an Academy Award Winner, and a woman who has already been a part of a successful science fiction franchise. And, I’ll admit, I’m eager to see her explore that avenue again after she was completely sidelined out of the X-Men films. I enjoyed her performance as Storm, and although I had heard that she got excluded for being difficult to work with, I can’t help but notice that white male stars like Christian Bale can throw massive tantrums and still get film after film making way for their pasty male faces. Confident women who know what they want have a history of being regarded as difficult, especially black women; difficult men have a history of being tolerated and catered to, especially white men.

So, I had real time for this. And we were going to space – so few TV shows or films actually do much of exploring the final frontier anymore.

What I’m saying is that I really wanted to like it.

Molly Woods (Halle Berry) returns from a 13 month tour of doing… something, alone, in space. She’s in the process of readjusting to being home and being with her husband and child. Fair enough.

But then her post-return physical has a surprise in store: she’s pregnant. She got pregnant. Whilst alone. In space. With nothing but her friendly male-voiced AI for company.

What’s more, she thought she was infertile. So much so that her husband, John (Goran Višnjić), has invented an android child, Ethan (Pierce Gagnon),  whom he hopes can learn to be a friendlier face for AI by growing up amidst a real family. And, you know, fill the child-shaped hole in his and Molly’s hearts.

On top of the whole pregnancy thing, it turns out there is a period of time unaccounted for in the recordings Molly made in space. Something… weird happened, knocking out a bunch of systems, including the AI, and Molly sees her ex-boyfriend, Marcus (Sergio Harford), in the air lock. Her ex-boyfriend who is dead. And maybe she hallucinates this and maybe something even weirder is going on, but I’m assuming this has something to do with the spontaneous baby?

Why the long face?

Well, like I say, a lot of good elements are here, and, hey, I got surprise androids! Usually a thing I’m not sad about. But… I feel like I accidentally signed up for a two-for-one deal on creepy children, and I’m not a massive fan of that trope anyway? It feels… lazy, overdone, and like it’s supposed to work based on some kind of primal fear of unfathomably evil children, but I don’t really buy into the idea that some kids are Just Wrong independently of how they are raised. Besides which, I really don’t find the ‘AI is evil’ thing that interesting. Again, if you create actual artificial intelligence I would expect it to grow and develop, to socially adjust to how it’s treated, just like kids. And whilst that’s John’s whole idea – raise the kid like a human kid and everything will be fiiiiine – I really get the vibe that the programme is setting us up for a fall.

Also, I am just Sick To Death of the trope of women’s bodies betraying them and being under the control of other people or nebulous forces. And using babies and pregnancy to make women feel powerless. Alien and mystical pregnancies have been a trope of a lot of male-written science fiction and fantasy when they actually start to grapple with including women in their casts. The Mystical Pregnancy was one of the early issues that Anita Sarkeesian tackled in her ‘Tropes vs Women’ series, and I seriously recommend watching that, as it does justice to the extensiveness of this creepy-ass trope in a way I don’t have space for here. The most striking example this side of the millennium is the case of Cordelia Chase in Angel. Cordelia’s second mystical pregnancy (that’s right, Joss Whedon has gone to that well with her before) was the result of Charisma’s real life pregnancy, and ultimately led to the character being written out of the show.* But more immediately in my mind, the mystical pregnancy  from season one of Hemlock Grove and the way this led to women being further instrumentalised via their reproductive capacities in season two have left a bitter taste in my mouth that I was really hoping Extant, with its strong woman of colour protagonist, would wash away. Aaaand no. No. Here we are again. Something or someone has impregnated Molly Woods against her will and her knowledge.

Once again a woman’s natural capacity to give birth is being co-opted into a horror trope. Once again a woman is set-up as independent and self-determining (her boss is suspicious about the lost footage because he knows her, and she’s not the kind of woman to make a mistake like that), but is shown to be helpless and powerless to stop others invading her own body and using it against her. Because she is a woman. Because she has a womb.**

How is it too much to hope that a woman, and a woman of colour, could be the protagonist of a science fiction show and not undermined and essentialised in this way? I give up. I’m exhausted. Yet another show I really want to invest time and energy in, but I can’t.

And don’t say the show doesn’t work because she’s a woman – don’t you dare! We know that female led films that pass the Bechdel test – action films like The Hunger Games – make more money than films that don’t. You can’t sell us this lie anymore to keep pushing your sexism. We want to see women, and people of colour, in good, protagonist roles. The problem isn’t the actor, isn’t her gender, isn’t the colour of her skin. The problem is the sexist writing.

Try again. We want a show that doesn’t disappoint like this. If you give it to us, we will watch it.

* All parties have been circumspect in speaking about it in public, but a combination of hints such as this interview given by Charisma to the Boston Herald, and these comments by Charisma at a Q&A (the relevant question comes in at about 2:43), have led many to speculate that she was effectively fired for getting pregnant.

** I hasten to stress that I fully understand that not all women have wombs – it is precisely this biological reductionism and essentialism I object to.