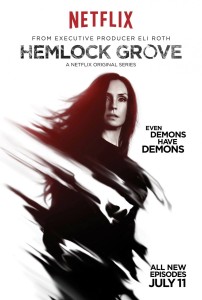 Well. The ratio of anticipation to disappointment on this season was striking.

The first season of Hemlock Grove was original, unexpected, challenging, exciting, unpredictable, and provided a wide range of interesting female characters. This season  drew extensively on racial stereotypes, reduced the number of interesting female characters, and dramatically increased their representation as instrumental objects to serve others’ needs (especially reproductive needs). Lots of gratuitous female nudity – the plot even working to specifically enable as much of this as possible – and yet where there was male nudity it was downright chaste in comparison.

Colour me ‘Eh’ with shadings of ‘rather pissed off, actually’.

Following the events of last season, Peter (Landon Liboiron), Destiny (Tiio Horn), and Lynda (Lili Taylor) have rejoined their Roma family. We catch up with them at a wake, which is going down with a lot of drink, music, and (for Destiny) sex. The wake is disturbed by the FBI, who have finally caught up with Lynda’s years of racketeering. For legal reasons I did not exactly follow, this means that Peter and Destiny must return to Hemlock Grove to put together his mother’s defence.

Roman Godfrey (Bill Skarsgård), meanwhile, has been dealing with becoming an upir, trying to find ways of feeding without killing people, and running the family company. Oh, and raising his Demon Spawn – I mean ‘Lovely little girl with unnaturally blue eyes that no one – no one at all – ever comments upon’.

Olivia Godfrey (Famke Janssen) is not dead. She’s been in a coma and then recovering, with the sinister aid of Dr Johann Pryce (Joel de la Fuente) and his new dodgy scientist side-kick, Dr Zheleznova-Burdukovskaya*, from dodgy Russia, with dodgy-but-nebulous war crimes hanging over her.

A young blonde woman, Miranda (Madeline Brewer – visually very similar to Lethe, Roman’s cousin, Peter’s girlfriend, whom Roman raped and impregnated with the Demon Spawn) is forced off the road near Roman’s house. She knocks on his door for help and he lets her phone for a tow-truck and stay with him until she’s ready to move on. Quelle suprise, the tow-truck company is the same one Peter has just got a job with.

Miranda begins a relationship with both Roman and Peter. As you do. What’s weirder is that Miranda starts spontaneously lactating, conveniently supplying nourishment for the Demon Spawn, and also affording the viewer many opportunities for close-ups on her breasts. Many. We did not need that many. We really got the picture from the milk-stains on her top. This whole thing was not subtle.

Meanwhile, Peter cons some drug dealers into thinking they are buying some magical drug, developed by the Roma people, by turning into a werewolf in front of them ‘on a bad moon’. This starts Peter off on a journey to become a vargulf (really uncool kind of werewolf that can change whenever he pleases but loses his humanity) which Destiny warns him about and he, you know, ignores her. Destiny is playing Cassandra this season.

He does this so that they can hire a lawyer for his mum, Lynda. For some reason, everyone refers to the lawyer as the ‘lady lawyer’, like this is 1950.

Meanwhile, Shelley Godfrey (Nicole Boivin and Madeleine Martin)is off in hiding, being kind of a badass and kind of really in trouble. Eventually, she returns to the fold, whereupon Dr Pryce explains about the naked blonde lady (again, very similar looking to Lethe) floating in a tank we’ve been seeing off and on throughout the season. He’d been ‘growing’ her to create the perfect human, but because he actually really does care for Shelley, he proposes copying Shelley’s brain patterns and putting them in the blonde girl, then killing Shelley’s old body, so that Shelley can live on in the ‘perfect’ body she’s always dreamed of. Which is just the bestest idea EVER.

And Norman is still floating around, trying to work out his relationship to Olivia, and the fact that it’s really not healthy, and I wish I could care about this, because I like Norman, but it’s for that exact reason that I never bought the relationship in the first place.

Why I was displeased

OK, so let’s talk about the racism, first. Season 1 started off a little bit racist, what with Peter and family introduced as basically on the left side of the law, but that kind of dropped away as Peter went on to be awesome and basically the hero in the way that Roman really turned out not to be. I had mixed feelings about it, but in a way that was kind of ‘hopefully they will improve in the second season’. Why do I keep thinking things like this? Nobody knows.

We see a lot more Roma people, and they are framed as lazy, jobless, carefree people who party a lot and don’t work for a living. The issue of systematic racism is lampshaded when the ‘lady lawyer’ mentions that the FBI will be really going after Lynda by angling to paint the Roma people as a criminal organisation. Which could have been explored interestingly, except for the fact that, despite Peter’s protests, that’s basically how they are presented within the world of Hemlock Grove.

And then there’s the whole ‘evil scientist’ thing. Dr Pryce was already showing up for the sinister Asian and the scientist Asian stereotypes, but now we have Dr Incomprehesibly-long-double-barrelled-name which is not her only incomprehensibly long alias. And she’s an Evil Russian. Like she just walked out of a Cold War Bond movie. She even has what a friend once described (referring to a Movie Nazi) as ‘Evil Hair’ – coiffed and then held severely solid by God only knows what heinous kind of product.

As for women? We’ve lost Lethe and Clementine from the first season, and Lynda is spirited away quicker than you can say ‘The script writer didn’t have any use for this character anymore’. Norman’s wife, Maria, finds her way out of the story pretty quick** The ‘lady lawyer’ is in about two scenes, maybe three. Destiny gets more screen time, but I’m not sure she does a single thing that actually affects the plot. Her biggest scenes involve swallowing psychotropic magic poisons for Peter’s sake. The first one has a needlessly suggestive snake slithering up her nethers. The second involves three people holding her head under water until she drowns. Yup, the themes of sexual objectification and violence against women are strong this season.

And if Miranda isn’t used instrumentally enough, there’s Prycilla, the girl Pryce has grown and whose brain he literally writes over for the sake of Shelley, and whom Dr Zheleznova-Burdukovskaya suggests to Olivia she might consume to overcome some of the difficulties she is facing. The girl exists to be used by others.

And speaking of Olivia, she is significantly powered down following Roman’s attack on her at the end of last season, and her plot is strongly focused about how, having been dominated by her son, her maternal instincts resurface and she wants to mend fences with her children and be a better girlfriend to Norman.  So, uh, not at all Freudian misogyny themed, then. It should be stressed that it’s a believable performance by Famke Janssen and the progression does work for the character, but in the context of the diminution of other female characters, the choice to take this path with her is striking.

Oh, and, in case you hadn’t gathered by now, absolutely no mention of Roman’s rapes is made whatsoever. There are no repurcussions for Roman for this. Roman’s redemptive arc is conducted solely against his present worry that he might hurt other people now that he’s an upir. It’s not just that he gets away with it – men get away with rape all the time, and I appreciated the ‘pretty guys you are rooting for can do this shit too’ aspect of how it was handled in the first season, but this season it is literally as though it never happened. Roman and Peter are reeling from Lethe’s death, Roman generally doesn’t like who he became under his mother’s power, but in as much as one might speculate as to his inner thoughts on the matter, any responsibility he might have taken for his own actions he seems to have shirked off, attributing it to Olivia and his upir nature. I kept expecting something to happen to reveal to Peter exactly what Roman had done. But nope. ‘Oh, Roman, why are you raising the baby when I was going out with her mother and had taken the decision to step up as the father? Why are you so focused on her being your daughter? How come that whole “impregnanted by an angel” thing is still unresolved from last season?’ Nuh-uh. Nadda. Nothing.

You can’t see it, but I am not wearing anything resembling my happy face right now.

The artistry and originality of the first season is gone. I felt none of the genre-bending ‘what am I watching’ mystery, most of the characters became less interesting, racism and sexism upped substantially, the fact that Roman is a rapist completely forgotten… It’s still well-acted and mostly well-scripted – I could and did consume this easily and quickly – but one is left, overall, with a bad taste in one’s mouth. This is not the show I was raving about last year.

*She’s not listed on either IMDB or Wikipedia, yet – I had to check the name in subtitles for the spelling – so I can’t say who the actor is.

**SPOILER: She gets fridged.

***There were instances of naked gents – Peter gets naked every time he changes, and two other guys are forced naked for torture reasons, but as I say, these are pretty chaste in presentation compared to the treatment Prycilla and Miranda get.