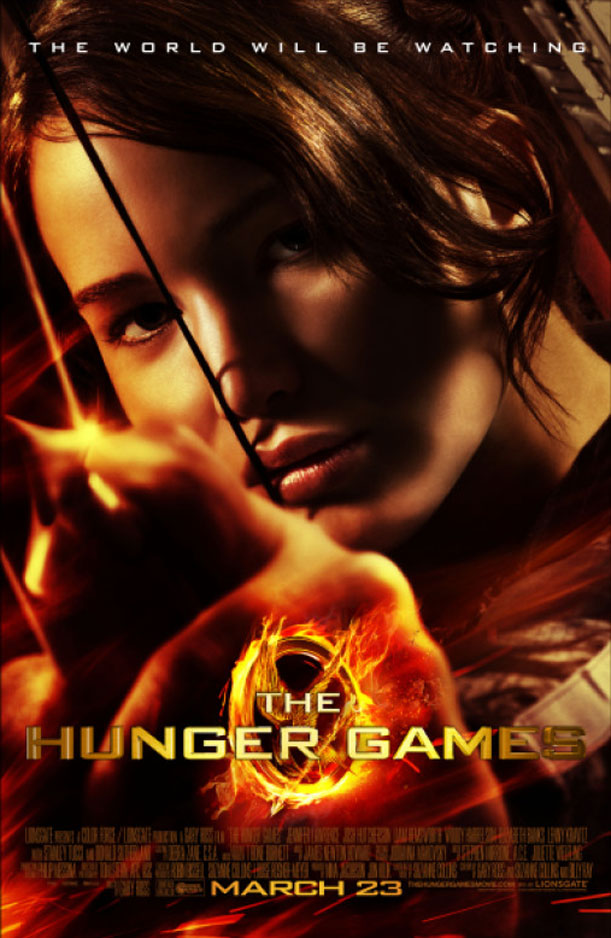 I went to see The Hunger Games last night, and I’m glad I did. I probably wouldn’t have bothered if Lee hadn’t said he wanted to as a part of our wine-and-geek-movies cinema thing. The reason for that is that I’d heard a lot of mixed reports of the film (and the books) in the run up to its release. Some people really liked it, some people thought that it was a) a Battle Royale rip off, and b) an unrealistic Mary-Sue/Supergirl-athon. To be fair, I’m always suspicious of accusations of the latter; I have a lot of sympathy for Comic Book Girl’s take down of the whole concept and its use in criticising women for writing wish-fulfillment fantasies where male wish-fulfillment fantasies (Batman, Superman, etc. etc.) are considered so natural that we don’t even think to call them Marty Stus, and therefore erroneously think of Mary Sues as a somewhat childish, primarily female phenomenon. I think the concept in the abstract has a use in highlighting poorly written wish-fulfillment characters, but its application often reveals a gender bias that sees it being over-applied to perfectly decent female characters, whilst leaving male counter-parts untouched, situating them under other, more positive labels, such as ‘architypal’.

But anyway, I’ll get into why exactly both these accusations were unfair in the case of The Hunger Games once I’ve given you a feel for the plot.

Once upon a time there was a great rebellion. It was so devastating that the authorities decided that harsh measures were needed to keep the population in check. They introduced The Hunger Games. Every year each district of Panem would send two youths, a boy and a girl, between the ages of 12 and 18 to fight to the death in an arena. The winner would receive riches beyond the dreams of the twelve districts outside the Capitol. The ‘tributes’ are chosen by lottery. You can increase your chances of being chosen by taking food in exchange for entering your name a second, (third, fourth, etc.) time for the lottery, and poverty outside of the Capitol is so extreme that many are prepared to do this.

Katniss (Jennifer Lawrence) is a 16-year-old girl who has been supporting her family since her father died. Her mother effectively broke down at his death, and Katniss assumed the role of provider for her younger sister. She does this primarily through poaching – hunting birds and squirrels with her bow and selling them on the black market. She’s very good with her bow.

When her sister, who is only 12, is chosen for the games on her very first entry to the lottery, Katniss volunteers to take her place. She is thrust into the strange and opulent world of the Capitol for a brief period of training, receiving advice from a ‘mentor’ (someone who has won a previous game) and trying to create both a likeable and memorable impression on the masses. Rich ‘sponsors’ can pay for items to be parachuted into the Games for tributes that they like, and these can make the difference between life and death, so creating the right impression is vital.

Eventually, though, the games themselves must begin and Katniss enters a fight for survival that can be as much about finding water and shelter as it is about killing and avoiding being killed.

This film was much longer than I expected it to be, and that was much to its benefit. It’s true that the idea of a deadly gameshow is not original – The Running Man springs to mind for me more readily than Battle Royale, but comparisons to both are valid. That, in itself, is no sin. The Hunger Games is interesting in being written post the reality TV explosion, as opposed to those books and films that merely predicted the slippery slope of our voyeuristic tendencies. By taking the time to outline the world in detail before thrusting Katniss into the Games the film allowed itself to be much more intelligent, vibrant, and engaging than a mere copy-cat. Indeed, in the UK and US at least, fears about reality TV ending in increasingly dangerous games seem to have proved unfounded. Big Brother has closed its doors, and the most successful reality shows nowadays tend to be those that either skew more towards talent shows or ‘docutainment’. Total Wipeout is tamer than tame, and really little more than a modern day It’s a Knockout. If you think shows like The Apprentice depict some kind of survival of the fittest I think you have a rather tame idea of ‘survival’ (or ‘fittest’, for that matter). Like Battle Royale, The Hunger Games understands that excessive violence in reality TV is unlikely to arise purely for entertainment; sustainment of the sort of cruelty involved in the Games requires some sort of government mandate and enforcement. However, unlike Battle Royale, The Hunger Games is distinctly conscious that the entertainment aspect is also vital, and the lengthy portion of the film devoted to exploring life in the Capitol, amongst the wealthy and powerful who perpetuate and orchestrate the perpetuation of the games, is vital to building plausibility and character into the film.

What The Hunger Games gets right is the direct link in our fears around our own voyeurism to what we know to have happened in societies like ancient Rome. Gladiatorial combat was both entertainment and a political vehicle. Or so films like Gladiator have taught me. I’m not claiming to be an expert historian – I’m not. But I think there is a truth to the idea of crowd-control via spectacle and the mixture of fear and voyeurism in some of the more cruel and brutal methods of punishment in the past. The names of the characters in The Hunger Games make the connection to the Roman spectacle explicit: Caesar Flickerman (Stanley Tucci) and Claudius Templesmith (Toby Jones) are the flamboyant presenters of the games, whilst Seneca Crane (Wes Bentley) runs the Games, and President Coriolanus Snow (Donald Sutherland) quietly pulls the strings behind the scenes. It’s an intelligent analogy that shows more thought as to what it would take for games like these to not only get started but to be maintained than is evident in the earlier iconic riffs on this theme. 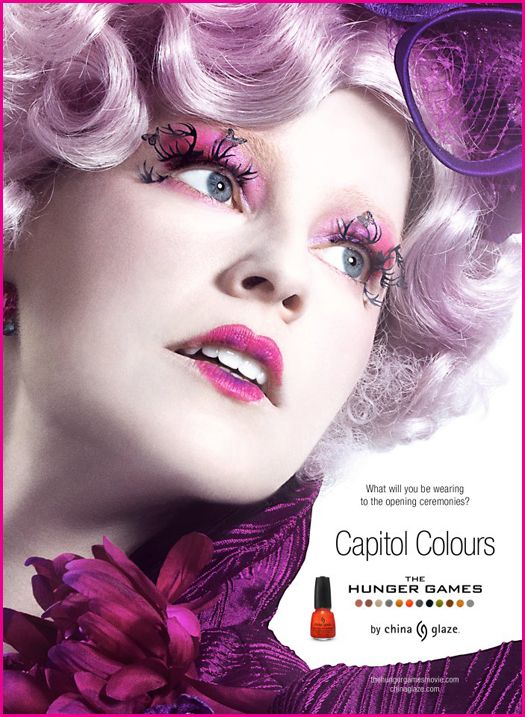 Similarly, the opulent wealth of the Capitol is strikingly realised. I both wanted their wealth and was disgusted by its comfortable maintenance in the face of the extreme poverty of the other districts. In our time of economic crisis it’s perhaps an easy hit to highlight the Occupy movement’s mantra concerning 1% of the people possessing 99% of the wealth, but I give them credit for doing this well, and for making it entertaining. Effie Trinket (Elizabeth Banks) is never less than fabulous, coiffed to perfection and with light-touch comic timing to die for. And the sleek, high levels of technology make me want their world, even as I despise what it is founded on. And that’s what a cautionary tale should do. It fails if it doesn’t make the future it warns against seem plausible. Even more impressive, they made Games seem like something I’d actually want to watch. Would I actually? I don’t know, I hope not, but the way they build the show makes it appealing to root for some tributes and dislike others. I can see how that would take hold, and that’s disturbing. Just as it should be.

As for Katniss, anyone who thinks she’s a Mary Sue just because she knows her way around a bow and seems smart and capable is not worth listening to. Katniss is not some kind of supergirl. She has one notable skill and demonstrates some intelligence, whilst never being presented as dramatically out of the ordinary. She is not one of the best fighters in the Games – in fact, quite a few people are demonstrably better, and even at her chosen weapon she is not an unerring shot. Her advantage lies in lying low and being likeable. She’s self-sacrificing without being holier-than-thou. She’s beautiful, but never overtly sexualised. She believes that she will kill if necessary, but she doesn’t want to.

There are only a couple of flaws in the movie. One is simply that Katniss has zero chemistry with either of her love interests. Her relationship with Peeta (Josh Hutcherson) is interesting, and well-played by both. I suspect there’s no chemistry there because there’s not meant to be – for Katniss, at least, it is all an act. She believes that by feigning love for Peeta for the cameras she raises her own chance of survival. It’s an interesting plot, but only intellectually. It never really grabbed my emotions because I never really wondered if she might really be falling for him. Whereas her love back home, Gale (Liam Hemsworth), is largely uninteresting and doesn’t really get enough screen time to register as anything but slightly annoying.

The other flaw is that the Games themselves are rather predictable. I don’t want to give too much away, but the level of jeopardy never seemed very high to me once it became clear that Katniss was not to be permitted too much moral ambiguity. There’s an interesting tension set up behind the fact that survival dictates that forming alliances is initially useful, but any friends made will later have to be turned on. Katniss voices earlier in the film that she may be prepared to kill, as she will do whatever it takes to get back to her little sister, but as the Games progress it becomes clear that the plot is working to avoid putting her in that situation as much as possible.

I don’t want to complain too much. It’s a 12A, there’s only so much moral ambiguity allowed for the protagonist in a film aimed at younger teens. I still enjoyed it, and I recommend it to you. This is not a film to change the history of cinema, and it’s unlikely to blow your mind on any fundamental level, but it’s well made, thoughtful, and very entertaining. I imagine a teenager watching this and having good reason to find it thought-provoking and memorable. It’s certainly one of the better science-fiction films of recent years, and I think it will enter the science fiction canon of films-other-geeks-will-expect-you-to-have-seen – if not for my generation, then certainly for the generation who are turning 12 now. 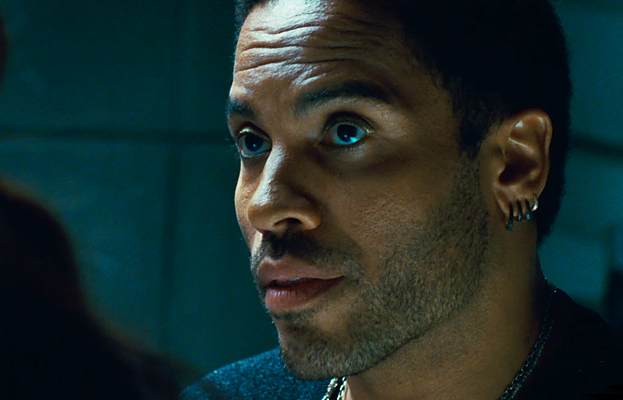 Cinna. You can't really see, here, but he is sporting some bitchin' eyeliner.

Moreover, it’s a class-act on both gender and race. A female lead who believably holds her own, carries the show, and is allowed two love interests, neither of whom render her a gibbering idiot who will be distracted from her own goals by the advent of their affection. There are also numerous non-white, non-token, non-stereotypical characters. Granted, you’d be forgiven for thinking that there were only two races in the world – black and white – but this is still a step up from virtually every film I’ve seen in the last few years. I adored, in particular, Lenny Kravitz as Cinna, Katniss’s stylist. In fact, in general I loved the gender play, in this movie. Whilst there are no explicitly gay characters (there may be many, but if so, their sexuality is not highlighted), but make-up seems to be something that it is perfectly OK for a man to sport. And whilst we’re here, let’s spread a little love for Seneca’s beard:

You should take some time out of your life to see this movie. It is worth you attention, and is both pretty and entertaining besides.

4 Responses to Review: The Hunger Games