(Index to all Torchwood posts here.) 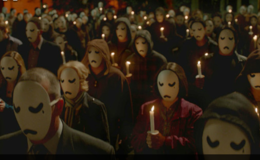 I want to say that I enjoyed episode three of Miracle Day every bit as much as the first two episodes, but I’m afraid I can’t. It wasn’t awful, it just didn’t really reach the same levels of excitement, fun, badassery, and intriguing sci-fi ideas.

Here’s what I think the main problem was: everyone has suddenly become considerably more rubbish. Esther has had a rocket-propelled slump from so-awesome-she-can-track-down-the-last-remaining-evidence-of-Torchwood in the first episode to so-pants-she-starts-adding-family-contacts-into-her-disposable-phone. Jack decides he needs a shag with a random guy in a gay bar instead of lying low and finding shit out. Rex also runs off to have a shag with a known acquaintance. About the only one who’s holding it together is Gwen, and she decides to lie to Rex as a part of a pissing contest to get herself out in the field, regardless of whether she’s the best person for the job.

Granted, I can see people getting all jiggy with it under the crazy circumstances, but it’s not like Jack hasn’t been there before, and part of being a professional is knowing when to keep it in your pants. I know it’s Torchwood, but I’m sure they could have worked in the ‘Jack has sex’ part with a little more finesse. About the only thing that amused me about this was the responses on Twitter that suggested that British sensibilities were the reason the sex happened off-screen at the same time that other people were laughing about how Torchwood is widely regarded as ‘Doctor Who with sex’. Not to mention that the boy-on-boy action that appeared in the Brit trailer was reportedly omitted from the US one. For Torchwood, it was pretty restrained, but given its randomness, I didn’t especially mind. It felt very much like a scene inserted to say: ‘In case you’ve been living in a bunker, Jack likes boys as well as girls!’

I’m also getting a little sick of the ‘For a small number of words, Brits and Americans are separated by a shared language’. Most people who’ve met the Internet are aware by now that ‘pants’ is a much funnier word in British English than American English. Do we really need it explaining? Would Gwen really be lost if she said ‘cash machine’ instead of ‘ATM’? Does the audience really need explaining to it that ‘chips’ and ‘crisps’ have different meanings on the opposed sides of the Atlantic?

I want to be more impressed by the Cult of the Soulless, but those masks are just trying too hard, and it’s risen up way too fast and too cohesively. It just feels like an easy intertextual reference to V for Vendetta and Anonymous that’s not actually doing anything with its connections.

But it’s not all bad. There’s a nice idea in a drug company being behind Miracle Day, or at least knowing it was coming and doing nothing about it for the sake of profit. The writers couldn’t have anticipated just how relevant the theme of overly powerful international corporations would be to us watching it now, but it’s the sort of thing that tends to recur in its relevance. See my review of Mr Smith Goes to Washington earlier this year. They thought it was massively important to keep challenging this stuff in 1939, and the writers of Miracle Day were thinking it before the current Murdoch scandal, too.

I’m also loving that Gwen is still showing a constant concern for her family and child. Having had the significance of this pointed out to me by my friend, I’ve had an eye out for whether Gwen’s distress at being separated from her child would just be a momentary nod, and I’m really pleased that it’s not, even though she’s still allowed to carry on kicking ass in the way that a daddy separated from his kid would in most TV and film.

Overall, I feel this was an episode mostly about progressing the plot. It didn’t thrill me, but it got the job done.